I recently completed the P90X2 home exercise program, and I wanted to provide a review for those who may be interested.

I’ve been fortunate enough to have been blessed with a good metabolism. I’ve always been tall with a very lean build. In fact, when I graduated high school, I was 6’2″ and 155 lbs. So between a good metabolism and an active lifestyle (I played lots of soccer and tennis in school), I stayed thin without having to worry about what I was eating.

Unfortunately, this led to me developing very poor eating habits. Like so many people, I began to see and feel the effects of this when I got to college and my activity rate plummeted while my caloric intake remained the same. To be honest, I was happy to put on the, “freshman fifteen” as I felt I had always been too thin and having some added weight would be a good thing.

Alas, the weight did not go where I wanted it to, and when I graduated college, I had a fairly noticeable belly developing. Fast forward a few years later, and I’m married with two kids. Throw in a full-time job and graduate school, and I had little time for exercise, and my eating habits hadn’t changed all that much. As I approached thirty, I certainly started feeling the effects of poor food choices combined with little/no exercise. I was routinely tired, sore, and was often injured if I participated in any sort of physical activity.

With the kids running around the house, and me barely being able to keep up, I decided I needed a change.

First and foremost, I addressed my diet. Since the purpose of this post is talk about P90X and not nutrition, I’ll keep this part short, but do not underestimate the importance of what you’re eating. In my opinion, nutrition is just as important as your level of physical activity. You can do all the push-ups and pull-ups you want, but if you follow them up with a cheeseburger and fries, the exercise is not going to do you much good. For that reason, I’ve adopted a high protein, low carbohydrate diet. If I had to pick one of the more commonly known nutrition styles, I would say I’m probably most closely aligned with the Paleo diet, although I do deviate here and there.

That being said, I did observe a noticeable difference from just changing what I was eating, but it didn’t get me where I wanted to be. As I previously mentioned, I was pretty skinny growing up, and I became very self-conscience of my appearance because of this. I was tired of that. I was tired of being embarrassed anytime I went swimming or wore a short-sleeved shirt or shorts because I had little muscle definition. I was done with feeling that way about myself.

So I started researching various exercise programs. And while I would have loved to try crossfit or something similar, my busy schedule dictated I find something I could do quickly and on my own time. For that reason, I researched several home exercise programs that required minimal equipment. My research quickly turned up the P90X program, which was pretty famous at the time. There were informericals for it on all the time. I had even gotten a copy and given it a try, but I was so out of shape I was repeatedly injuring myself and having to start over. It wasn’t before long that I had called it quits.

With the announcement of P90X2, I began looking into it. My impressions were that this program was better tailored for people who may be out of shape, like myself. I decided to give it a try. I’ll be perfectly honest here – I started/stopped P90X2 twice before I was able to see it through to the end. This had to nothing to do with the program itself, but for whatever reasons, I lost my motivation and dedication to it.

With the new year coming around, I resolved to be healthier. I don’t know what was different this time, but I was determined to see X2 through to the end. Perhaps it was the culmination of the things I spoke about all coming to a head. If I had to put my finger on it, I would have to say my determination was largely driven by my children. My daughter had just turned three; my son one. With them both being so active, I wanted to be able to participate. I wanted to be able to play with them, run around the yard, coach their sport teams, and not have to worry about being hurt or out of shape.

From my previous attempts at P90X, one thing I’ve learned is that the best time for me to work out is first thing in the morning. For me, my work schedule can be somewhat dynamic, and I never know when I may have to work late. For that reason, I started getting up early and heading down to our exercise room first thing each morning…

One of Beachbody’s (the parent company behind the P90X series) mantras is, “Decide. Commit. Succeed.” It sounds simple, but that’s really what it comes down to. They have a vast variety of programs designed to get people into shape. So if you decide you need a change, you just need to commit to one of the programs, and you will succeed.

This isn’t meant to sound like an advertisement, but I truly believe that people will succeed with the P90X programs, provided they stick to it. And that’s what I did. Now I won’t lie – I didn’t stick to the schedule 100%, but I would say I followed the program around 90%, and I still made great progress. I saw improvements in my strength, endurance, and muscle definition.

So, without further delay, here is a summary of my results:

Now these numbers may not sound like much, but remember this was over ninety days! In that time I lost over five pounds of body fat and replaced it with over seven pounds of muscle – in thirteen weeks!

But I know most people want to see before and after pictures, so here they are! 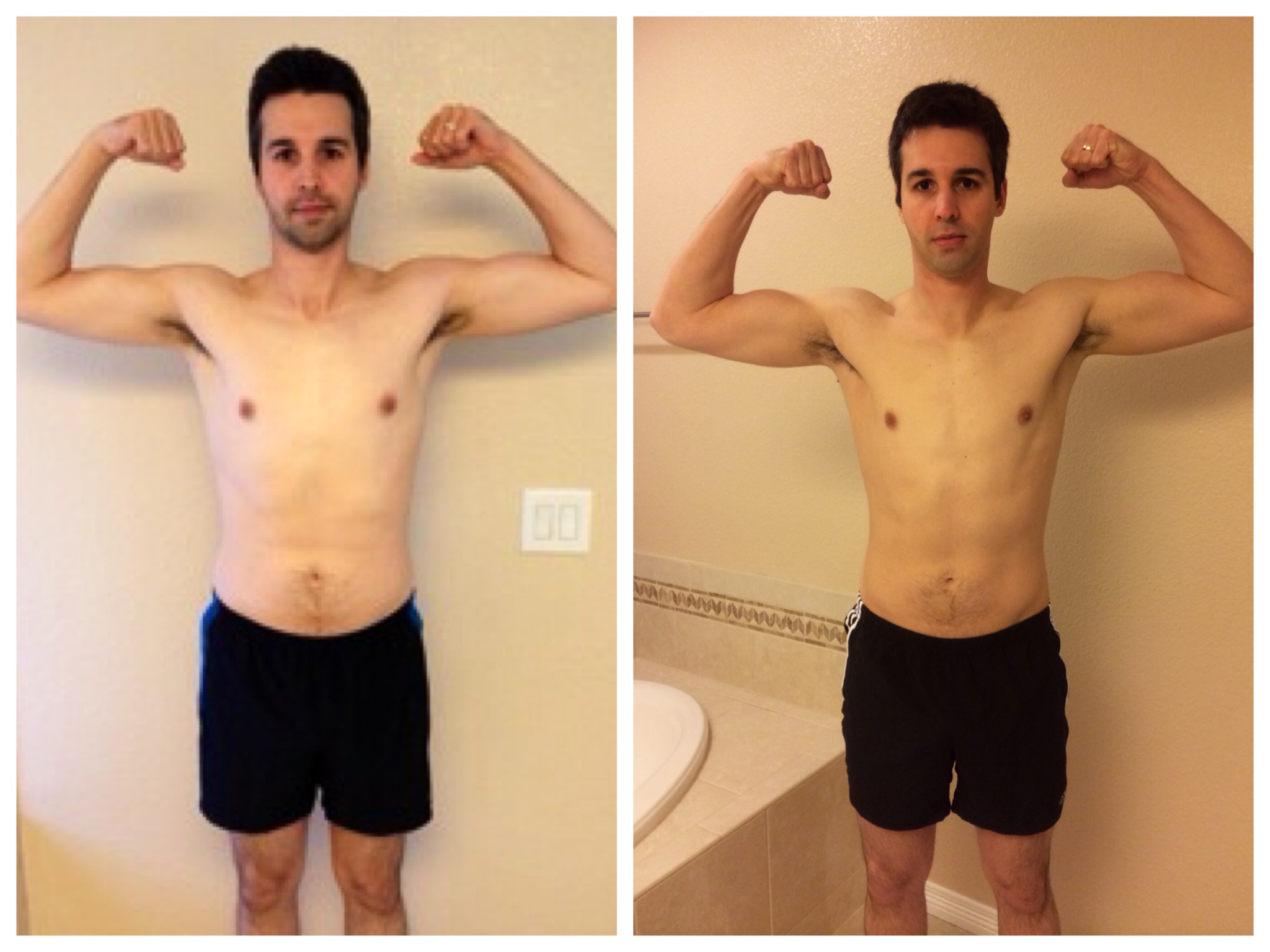 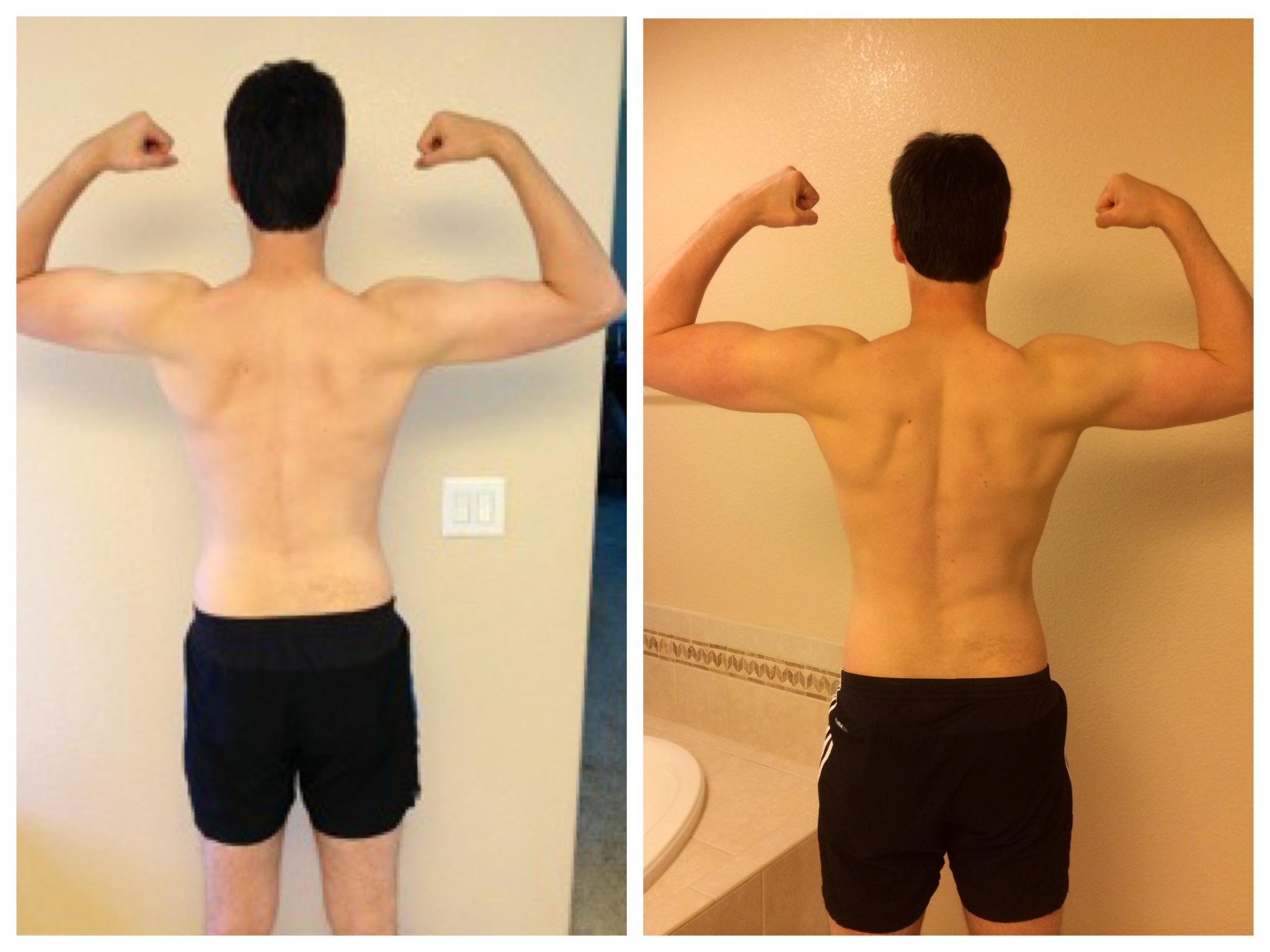 During the program, a lot of people asked me what I was going to do after I finished. One of the great things I took away from doing X2 is that fitness is no longer a chore or something I need to fit in – it’s now part of my lifestyle.

However, one of the more challenging aspects to completing the P90X programs (other than it kicking your butt!) is the time commitment. The P90X and X2 workouts are all about an hour, if not longer. So, my wife and I have decided to attack P90X3! One of the great things about X3, contrary to its predecessors, is that the workouts are only thirty minutes. And as I write this, we are already into Phase II of X3!

What’s after X3 you may ask? Well, over the course of X2 and X3, I have begun biking, running, taking yoga classes, and I can’t wait to spend more time focussing on the physical activities I especially enjoy as opposed to sticking to a very disciplined regiment. While the Beachbody programs get the job done, I’m looking forward to exploring many more activities that will keep our family strong and healthy for years to come.