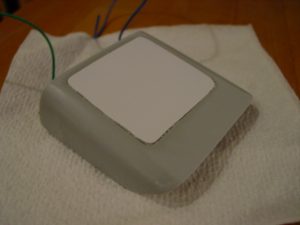 Once the epoxy was cured, I sanded the panel down with 220 grit sandpaper using a circular sanding motion. I also wiped off the excess styrene and resin with a wet sponge in between sandings. I was careful not to sand too tough as to remove the resin of the door itself. I got the styrene panel to be as flush as possible. 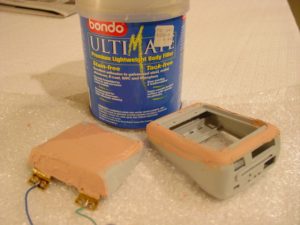 Next, I mixed up some Bondo automotive filler and applied it to the panel and hinges of the lower door, as well as the main seam of the body. Again, I was careful not to put too much Bondo on the hinges, which could later inhibit their movement. I then let it cure overnight just to be sure. 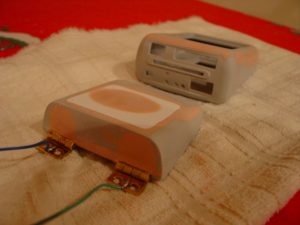 When the Bondo was done curing, I carefully removed any huge clumps with a hobby knife. I also removed the Bondo from the hinge areas, which could prevent the door from opening. I then sanded the lower door on a flat surface, starting with 100 grit sandpaper and gradually working my way up to 400 grit. Again, I used a circular sanding motion, and wiped the door off with a moist sponge in between to remove excess material. I used a sanding block on the hinge-surface to create a flat face.