With any kit, you should first read the instructions through in their entirety. This will give you an overall idea of what you have to accomplish and how each step fits in with the next. After reading through the instructions for the kit, I found that one of the final steps is adding a strip of velcro to the detachable handscanner to attach it to the tricorder. I thought I’d try something a little different and decided to use some magnets instead. I went to K&J Magnetics and ordered their D48DIA magnet. I decided to go with this model since it’s small enough to fit inside the scanner (dimensions of 1/4″ x 1/2″). Also, it is diametrically magnetized so the poles are on the sides of the cylinder. This is ideal for my application since the partnered magnet will need to lay flat inside the tricorder housing in order to fit. I gave the two magnets a test fit on the back half of the tricorder body to make sure they’d work. I also marked the touching sides of the magnets so when the pieces are assembled, the opposite poles are touching. This will avoid the magnets from being offset, which would cause them to pull on each other in an attempt to align correctly, which could damage the pieces later. 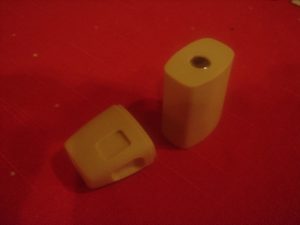 Since the scanner is resin, I first washed the two pieces in warm water and gave them a good scrubbing to remove any mold releasing agent. I then carefully drilled a 1/4″ diameter hole into the lower section of the handscanner. I marked a 1/2″ length on my bit, so I knew where to stop drilling so I wouldn’t put a hole in the bottom of the scanner. The magnet fit in very nicely. 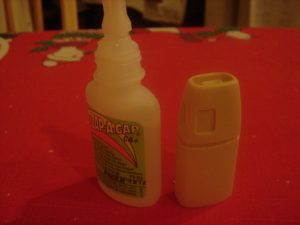 Glueing the two halves together

I then used some superglue to secure the two halves of the scanner together. 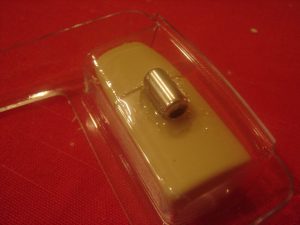 Attaching the magnet to the kit