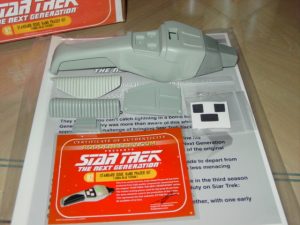 The goal of this project is to construct a replica of the Type II Phaser as seen on later seasons of Star Trek: The Next Generation and early seasons of Deep Space Nine and Voyager. Feel free to click on any of the pictures for a larger (pop-up) version. Since I’m not a scratch-builder first, I’ll start off with a kit including the main components consisting of the body, the emitter, the lower access panel, the setting indicator, and the two grips. If anyone is interesting in building the same kit, you can get one from Roddenberry.com. These kits come right from the people who made the props for the show, so you’ll be hard-pressed to find something better in terms of accuracy. Also, I’ve built up a few of Rodd.com’s kit, and they are of great quality. 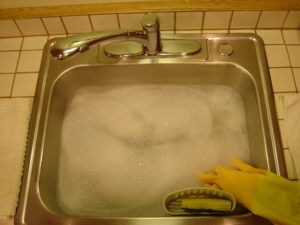 First step, with any cast piece, is to wash it thoroughly. This ensures that any mold-releasing agent present on the kit is removed. This releasing agent could interfere with the adhesion of paint in the later steps, so it’s always a good idea to wash your resin kits before assembly.