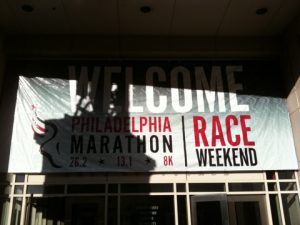 It’s hard to believe that it’s been almost six months since I decided to tackle my first marathon. And yet, here we are, two days away from the big day in Philadelphia.

Today, my mom and I ventured into the city to pick up my bib and race package, which consisted of a bag, a racer’s guide, course map, and a few free samples of various products. I have to admit, the reality of the situation hadn’t really hit me until I pulled the t-shirt out of the bag and realized this was really happening.

As I look back on the last six month’s of training, I will freely admit I didn’t go at it hard enough. Anyone who’s been following my day-to-day training updates will know I never quite reached the long distances laid out in the training program. And between a hectic work schedule, preparing for the arrival of our first child, and applying to graduate school, even my routine runs have been difficult to find time for.

With the race just two days away, I suppose I’m feeling the apprehension most runners feel before a big race. Am I ready? Can I do it? Has the training been enough? 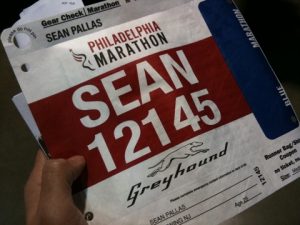 And yet deep down, I feel a swell of confidence telling me yes, I can do it, and yes, I am going to make it. Not because I’m some super athlete (anyone who knows me can vouch for that). But I know I can do it because of how far I’ve come. Seven months ago, if someone had asked me if I could run even a half-marathon, I would have said no. And yet, now I’ve done it. So while I haven’t run a full marathon just yet, I know I have it in me.

As I expected, the hardest part of training wasn’t the physicality of it all, but the mental part. And as I’ve explained to everyone who’s asked me, “why?” I’m doing it to show that people can do things they might not believe they’re capable of.

As I mentioned, Jamie and I are expecting the birth of our first child in just a few days, and I’m hoping to be in the swing of graduate studies come late January. As I look forward to the challenges ahead, I have confidence we will succeed. Why? Because even though we haven’t it done it yet, I know I can accomplish whatever I choose, as long as I put my mind to it.

I’d also like to take this opportunity to say thank you to a few people:

So stay tuned for the results, and hope that Arianna sits tight until after Sunday!