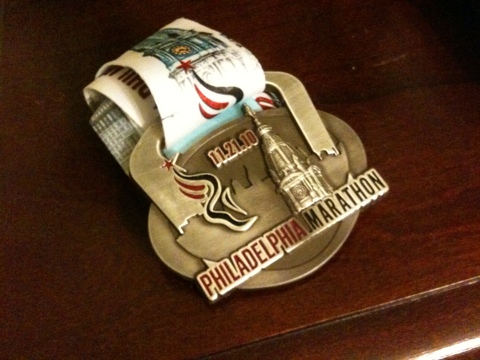 As my last post indicated, last Sunday was the Philadelphia Marathon; an event I spent most of the year training for.

The event was quite an experience, one that is difficult to put into words.

Needless to say, I didn’t sleep all that well the night before, and was frequently waking up to check the clock. When the alarm finally rang at 4AM, I headed downstairs and had to force myself to eat breakfast. A hearty bowl of oatmeal and a tall glass of water was the meal of choice.

As Jamie and I drove into Philadelphia, it was still very dark and quite chilly. My mind started going over everything again and again. Was I ready for this? Would I finish? Did I hydrate enough? I was pretty nervous to say the least.

Once we arrived at the Art Museum, where the race was to start, I was taken aback by the sheer number of people there were (I think the news reports there were some 11,000 participants, not to mention spectators). The roads were packed with cars and the sidewalks with pedestrians. Jamie and I found our way to a nearby parking garage, and then headed into the center of activity. Since I had been drinking so much water, I naturally had to make a stop at the Port-a-Johns prior to lining up in my corral. Due to the volume of people, we ended up waiting in line for over half an hour, and I actually missed the start of the race (the first group though, not mine).

After having had a chance to empty my bladder, I was able to say hello to all my family and friends who came out to support me, prior to heading to my corral, which happened to be the last grouping. This actually worked out fairly well, as I had plenty of time to do one last gear check and have a good stretch prior to our corral starting. Right around 07:45AM, we were off!

I have to admit, the first seven or eight miles of the Philadelphia Marathon were gorgeous and quite easy to tackle. The terrain is relatively flat as you venture down to the water front, through Independence Hall, and back toward the Art Museum. As we came into the half-way point, I was feeling pretty good, although I could feel my feet and knee starting to fatigue.

Making sure to hydrate and refuel as best I could, I trudged on. I guess it was somewhere between miles 15 and 18 when I slowed down at an aid station for some fluids, and when I started to run again, I felt a sudden, sharp pain in my left knee. Initially, I was able to push through it, but by the time I got to mile 20, the pain was too much bear.

That was a pretty difficult time. I started thinking I couldn’t go on, and that I would have to be carted off to the finish. The idea of quitting after all the training I had done, not to mention the 20 miles I had already completed, was difficult to deal with. Luckily, I managed to put enough pressure on it to walk, and I made the decision that I was going to finish, even if I had to walk the last six miles.

And that’s exactly what I did. No matter how many times I tried to run in those last miles, my knee just wasn’t having it. Those were a few long miles, and it didn’t help that the support staff actually started breaking down the various mile markers and aid stations as I was going through them. Talk about discouraging…

In the end, I made it across the finish line. Coming up over that last small hill and seeing the finishing gate is quite a site. After the struggle of walking through the final miles, the effort of running for almost four hours, the days and days of training, that finishing gate represented everything I had worked for. I can’t quite describe what it felt like to see it, but it was such an incredible feeling to have the finish line in my sights and to know I was just a few steps away from completing a goal I had set for myself almost six months prior. As I crossed the finish, I could hear my family and friends cheering, and it felt amazing to know I had done it.

While I had hoped to finish in under five hours, my official time was 06:14. While it wasn’t exactly what I was shooting for, my primary goal was to finish, and I’m happy to say I did that. You can also view my personal record of the race that I tracked on my Garmin Forerunner, here: My Garmin results

Again, I have to say thank you to everyone who came out to show their support. I know waking up early on a Sunday morning to stand around Philadelphia in the cold couldn’t have been fun, but it meant a lot that you all were there for me.

Looking back at the entire experience, I suppose it’s bittersweet that it’s over, but it’s something I’ll never forget. The main reason I set out to do the marathon was to see just how far I could push myself. When I started training, I didn’t care much for running, but now I’ve come to enjoy it. It’s great exercise, but it also gives me some time to clear my head. Plus, I get to spend some quality time with our dog, Dakota, as we run around town. Considering how much I used to despise the idea of just going out for a run, I suppose that in itself, is a victory.

I still don’t know where my limits are, but at least I know they’re somewhere beyond 26.2 miles…